(For the engraver, see Thomas Garner (engraver).) Thomas Garner (1839–1906) was one of the leading English Gothic revival architects of the Victorian era. He is known for his almost 30-year partnership with architect George Frederick Bodley. 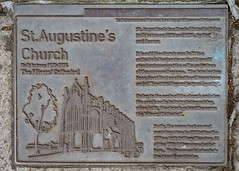 St Augustine's Church Built between 1870-1874 The Miners’ Cathedral St. Augustine’s is a Grade I listed building built between 1870 and 1874 by Bodley and Garner. It is said the church was built to a cathedral sized scale so that it would stand out amongst the mills and mines of the surrounding area. The interior has been described as of national importance and of “breathtaking majesty and purity”. Owing to the scale of the church and also the area’s main industry being mining, when built, the church gained the name the ‘Miner’s Cathedral’. Sadly, the name took on a real meaning when in 1885 after the Clifton Hall Colliery Disaster 64 of the 178 victims were buried here. Their memorial stands in the churchyard today.