Charles Babbage KH FRS (/ˈbæbɪdʒ/; 26 December 1791 – 18 October 1871) was an English polymath. A mathematician, philosopher, inventor and mechanical engineer, Babbage originated the concept of a digital programmable computer. Babbage is considered by some to be "father of the computer". Babbage is credited with inventing the first mechanical computer, the Difference Engine, that eventually led to more complex electronic designs, though all the essential ideas of modern computers are to be found in Babbage's Analytical Engine, programmed using a principle openly borrowed from the Jacquard loom. Babbage had a broad range of interests in addition to his work on computers covered in his book Economy of Manufactures and Machinery. His varied work in other fields has led him to be described as "pre-eminent" among the many polymaths of his century. Babbage, who died before the complete successful engineering of many of his designs, including his Difference Engine and Analytical Engine, remained a prominent figure in the ideating of computing. Parts of Babbage's incomplete mechanisms are on display in the Science Museum in London. In 1991, a functioning difference engine was constructed from Babbage's original plans. Built to tolerances achievable in the 19th century, the success of the finished engine indicated that Babbage's machine would have worked. 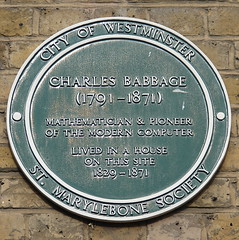 The Side of Walworth Clinic, Larcom Street, Walworth, London, United Kingdom where they lived

1a Dorset Street, Westminster, London, United Kingdom where they lived

Charles Babbage mathematician, astronomer and computer pioneer was born near this site

corner of Larcom Street and Walworth Road, London, United Kingdom where they was born (1791)