Henry John Temple, 3rd Viscount Palmerston, KG, GCB, PC, FRS (20 October 1784 – 18 October 1865) was a British statesman who was twice Prime Minister of the United Kingdom in the mid-19th century. Palmerston dominated British foreign policy during the period 1830 to 1865, when Britain stood at the height of its imperial power. He held office almost continuously from 1807 until his death in 1865. He began his parliamentary career as a Tory, defected to the Whigs in 1830, and became the first prime minister from the newly formed Liberal Party in 1859. He was highly popular with the British public. David Brown argues that "an important part of Palmerston's appeal lay in his dynamism and vigour". Henry Temple succeeded to his father's Irish peerage (which did not entitle him to a seat in the House of Lords, leaving him eligible to sit in the House of Commons) as the 3rd Viscount Palmerston in 1802. He became a Tory MP in 1807. From 1809 to 1828 he served as Secretary at War, organising the finances of the army. He first attained Cabinet rank in 1827, when George Canning became prime minister, but like other Canningites, he resigned from office one year later. He served as foreign secretary 1830–1834, 1835–1841, and 1846–1851. In this office, Palmerston responded effectively to a series of conflicts in Europe. In 1852 Aberdeen formed a coalition government. The Peelites insisted that Lord John Russell be foreign secretary, forcing Palmerston to take the office of home secretary. As home secretary Palmerston enacted various social reforms, although he opposed electoral reform. When Aberdeen's coalition fell in 1855 over its handling of the Crimean War, Palmerston was the only man able to sustain a majority in Parliament, and he became prime minister. He had two periods in office, 1855–1858 and 1859–1865, before his death at the age of 80 years, a few months after victory in a general election in which he had achieved an increased majority. He remains most recent British prime minister to die in office. Palmerston masterfully controlled public opinion by stimulating British nationalism. Although Queen Victoria and most of the political leadership distrusted him, he received and sustained the favour of the press and the populace, from whom he received the affectionate sobriquet "Pam". Palmerston's alleged weaknesses included mishandling of personal relations, and continual disagreements with the Queen over the royal role in determining foreign policy. Historians rank Palmerston as one of the greatest foreign secretaries, due to his handling of great crises, his commitment to the balance of power (which provided Britain with decisive agency in many conflicts), his analytic skills, and his commitment to British interests. His policies in relation to India, China, Italy, Belgium, and Spain had extensive long-lasting beneficial consequences for Britain. This does not mean that Palmerston is completely without controversy. Palmerston's leadership during the Opium Wars was questioned and denounced by other prominent statesmen such as William Ewart Gladstone. The consequences of the conquest of India may have, at first, seemed to benefit both Britain (in the sense of access to goods and gold) and India (by adding infrastructure and a stable justice system), but this view has been challenged by more recent scholarship. Both the burdens placed on India by enduring the rule of a nation so far away and on the British government saddled with enduring the anxiety of generations of officials on how to properly govern had ended up producing a chaotic administration with minimal coherence. The consequences of his policies toward France, the Ottoman Empire, and the United States proved more ephemeral. 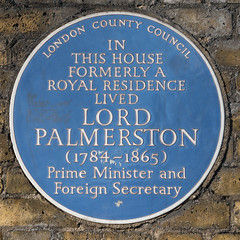 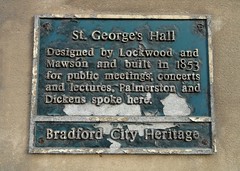 The Market Hall Built in 1859-60 to the designs of Joseph Wilson. Opened by the Prime Minister Viscount Palmerston. This side of Market Place, known in the 17th century as the Shambles, has been designated for the sale of fresh meat since the 14th century. The lane behind was known as Pudding Middens. Rebuilt 1957.

St. George's Hall. Designed by Lockwood and Mawson and built in 1853 for public meetings, concerts and lectures. Palmerston and Dickens spoke here.