surgeon, Fellow of the Royal Society, and pioneer anatomist

John Hunter FRS (13 February 1728 – 16 October 1793) was a British surgeon, one of the most distinguished scientists and surgeons of his day. He was an early advocate of careful observation and scientific method in medicine. He was a teacher of, and collaborator with, Edward Jenner, pioneer of the smallpox vaccine. He is alleged to have paid for the stolen body of Charles Byrne, and proceeded to study and exhibit it against the deceased's explicit wishes. His wife, Anne Hunter (née Home), was a poet, some of whose poems were set to music by Joseph Haydn. He learned anatomy by assisting his elder brother William with dissections in William's anatomy school in Central London, starting in 1748, and quickly became an expert in anatomy. He spent some years as an Army surgeon, worked with the dentist James Spence conducting tooth transplants, and in 1764 set up his own anatomy school in London. He built up a collection of living animals whose skeletons and other organs he prepared as anatomical specimens, eventually amassing nearly 14,000 preparations demonstrating the anatomy of humans and other vertebrates, including 3,000+ animals. Hunter became a Fellow of the Royal Society in 1767. He was elected to the American Philosophical Society in 1787. The Hunterian Society of London was named in his honour, and the Hunterian Museum at the Royal College of Surgeons preserves his name and his collection of anatomical specimens. It still contains the illegally procured body of Charles Byrne, despite ongoing protests. 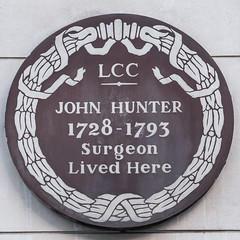 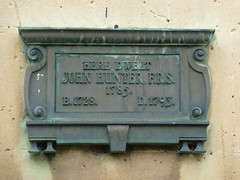 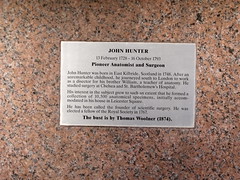 John Hunter, 13 February 1728 - 16 October 1793, Pioneer Anatomist and Surgeon. John Hunter was born in East Kilbride, Scotland in 1728. After an unremarkable childhood, he journeyed south to London to work as a disector {sic} for his brother William, a teacher of anatomy. He studied surgery at Chelsea and St. Bartholemew's {sic} Hospital. His interest in the subject grew to such an extent that he formed a collection of 10,500 anatomical specimens, initially accommodated in his house in Leicester Square. He has been called the founder of scientific surgery. He was elected a fellow of the Royal Society in 1767. The bust is by Thomas Woolner (1874).