statesman and 1st Baron Hore-Belisha (from 1954)

Leslie Hore-Belisha, 1st Baron Hore-Belisha, PC (/ˈhɔːr bəˈliːʃə/; 7 September 1893 – 16 February 1957) was a British Liberal, then National Liberal Member of Parliament (MP) and Cabinet Minister. He later joined the Conservative Party. He proved highly successful in modernizing the British road system in 1934–1937 as Minister of Transport. As War Secretary, 1937–1940, he feuded with the commanding generals and was removed in 1940. Some writers believe anti-semitism played a role in blocking his appointment as Minister of Information although considering Churchill's close relationship with Duff Cooper and Brendan Bracken this seems unlikely.His biographer compares his strong and weak points: He was a brilliant speaker, a warm and engaging personality, a go-getter and a persistent driver, a master of the unconventional or indirect approach, a patriot and a man of moral and physical courage, not a great intellect but an original with a flair for imaginative gestures and for public relations. He also had personal weaknesses. He was extremely self-centred and had a fine conceit of himself. At times he was accused of sharp practice. ... Sharp practitioner or not, [his] quickness of mind and tongue, and transparent ambition to be seen to succeed, made him vulnerable to smears. ... His over-assertiveness ... led him to appear inconsiderate of the feelings and views of others. His name is still widely associated in the UK with the introduction of flashing amber "Belisha beacons" at pedestrian crossings while he was Minister for Transport. 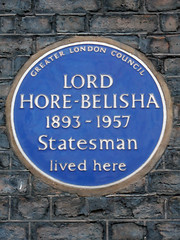