television pioneer and Fellow of the Royal Society of Edinburgh

John Logie Baird FRSE (/ˈloʊɡi bɛərd/; 13 August 1888 – 14 June 1946) was a Scottish inventor, electrical engineer, and innovator who demonstrated the world's first live working television system on 26 January 1926. He went on to invent the first publicly demonstrated colour television system and the first viable purely electronic colour television picture tube. In 1928 the Baird Television Development Company achieved the first transatlantic television transmission. Baird's early technological successes and his role in the practical introduction of broadcast television for home entertainment have earned him a prominent place in television's history. In 2006, Baird was named as one of the 10 greatest Scottish scientists in history, having been listed in the National Library of Scotland's 'Scottish Science Hall of Fame'. In 2015 he was inducted into the Scottish Engineering Hall of Fame. On 26 January 2017 – IEEE unveiled a bronze street plaque at 22 Frith Street (Bar Italia), London, dedicated to Baird and the invention of television. In 2021 'The Royal Mint' of Great Britain has celebrated the life and work of one of the United Kingdom’s most innovative inventors, with the unveiling of a commemorative John Logie Baird, 50p brilliant uncirculated coin. Year-dated 2021 commemorating the 75th anniversary of Baird’s death. 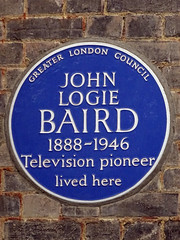 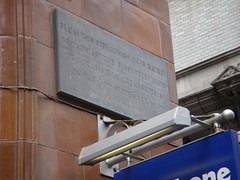