printer, publisher, and founder of the Baskerville Press

John Baskerville (baptised 28 January 1707 – 8 January 1775) was an English businessman, in areas including japanning and papier-mâché, but he is best remembered as a printer and type designer. 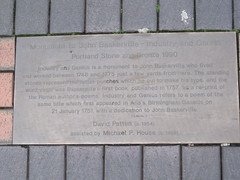 John Baskerville 1706-1775 printer, publisher and founder of the Baskerville Press lived in a house formerly standing on this site

Industry and Genius monument - Centenary Square, Birmingham, United Kingdom where they is commemorated (1990)