Hattie Jacques (/dʒeɪks/; born Josephine Edwina Jaques; 7 February 1922 – 6 October 1980) was an English comedy actress of stage, radio and screen. She is best known as a regular of the Carry On films, where she typically played strict, no-nonsense characters, but was also a prolific television and radio performer. Jacques started her career in 1944 with an appearance at the Players' Theatre in London, but came to national prominence through her appearances on three highly popular radio series on the BBC: with Tommy Handley on It's That Man Again; with ventriloquist Peter Brough on Educating Archie; and then with Tony Hancock on Hancock's Half Hour. After the Second World War Jacques made her cinematic debut in Green for Danger (1946), in which she had a brief, uncredited role. From 1958 to 1974 she appeared in 14 Carry On films, playing various roles including the formidable hospital matron. On television she had a long professional partnership with Eric Sykes, with whom she co-starred in his long-running series Sykes and Sykes and a.... The role endeared her to the public and the two became staples of British television. In private, Jacques led a turbulent life. She was married to the actor John Le Mesurier from 1949 until their divorce in 1965, a separation caused by her five-year affair with another man. Jacques, who had been overweight since her teenage years, suffered ill-health soon after the separation from Le Mesurier and her weight rose to nearly 20 stone (280 lb; 130 kg). She died of a heart attack on 6 October 1980, at the age of 58. Her biographer, Frances Gray, considers Jacques had a "talent for larger-than-life comedy which never lost its grip on humanity", while she could also display "a broader comic mode" as a result of her "extraordinary versatility". 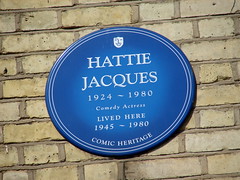 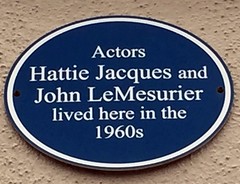 BBC Radio Theatre W1, London, United Kingdom where they was