John Nash (18 January 1752 – 13 May 1835) was one of the foremost British architects of the Georgian and Regency eras, during which he was responsible for the design, in the neoclassical and picturesque styles, of many important areas of London. His designs were financed by the Prince Regent and by the era's most successful property developer, James Burton. Nash also collaborated extensively with Burton's son, Decimus Burton. Nash's best-known solo designs are the Royal Pavilion, Brighton; Marble Arch; and Buckingham Palace. His best-known collaboration with James Burton is Regent Street and his best-known collaborations with Decimus Burton are Regent's Park and its terraces and Carlton House Terrace. The majority of his buildings, including those that the Burtons did not contribute to, were built by James Burton's company. 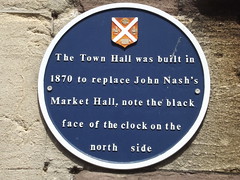 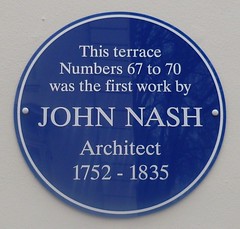 The Town Hall was built in 1870 to replace John Nash's Market Hall. note the black face of the clock on the north side

John Nash 1752-1835, Architect. He designed much of the layout of Regency London, including Regent Street and Regent's Park, and many exceptional buildings, such as the remodelling of Buckingham Palace and the Royal Mews, and relocation of Marble Arch. In St. James's, his works include Carlton House Terrace, Clarence House, The Theatre Royal, and the former United Services Club, Pall Mall. John Nash supervised the design and layout of the St James's Square gardens including this pavilion, known as the Nash Summer House.

St James's Square, London, United Kingdom where they was

67-70 Great Russell Street, London, United Kingdom where they was