Mervyn Laurence Peake (9 July 1911 – 17 November 1968) was an English writer, artist, poet, and illustrator. He is best known for what are usually referred to as the Gormenghast books. The three works were part of what Peake conceived as a lengthy cycle, the completion of which was prevented by his death. They are sometimes compared to the work of his older contemporary J. R. R. Tolkien, but his surreal fiction was influenced by his early love for Charles Dickens and Robert Louis Stevenson rather than Tolkien's studies of mythology and philology. Peake also wrote poetry and literary nonsense in verse form, short stories for adults and children (Letters from a Lost Uncle), stage and radio plays, and Mr Pye, a relatively tightly-structured novel in which God implicitly mocks the evangelical pretensions and cosy world-view of the eponymous hero. Peake first made his reputation as a painter and illustrator during the 1930s and 1940s, when he lived in London, and he was commissioned to produce portraits of well-known people. For a short time at the end of World War II he was commissioned by various newspapers to depict war scenes. A collection of his drawings is still in the possession of his family. Although he gained little popular success in his lifetime, his work was highly respected by his peers, and his friends included Dylan Thomas and Graham Greene. His works are now included in the collections of the National Portrait Gallery, the Imperial War Museum and The National Archives. In 2008, The Times named Peake among their list of "The 50 greatest British writers since 1945". 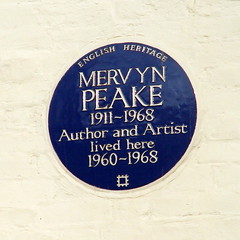 Mervyn Lawrence Peake (1911-1968). Peake was best known as a novelist. He was the author of 'Titus Groan', 'Gormanghast' and 'Titus Alone'. He was also a recognised artist, showing a talent for illustrating and etching. After 1945 he became an accredited war artist. Peake lived on this site in 'Woodcroft' between 1922-32 and 1952-62