George Edmund Street RA (20 June 1824 – 18 December 1881), also known as G. E. Street, was an English architect, born at Woodford in Essex. Stylistically, Street was a leading practitioner of the Victorian Gothic Revival. Though mainly an ecclesiastical architect, he is perhaps best known as the designer of the Royal Courts of Justice on the Strand in London. 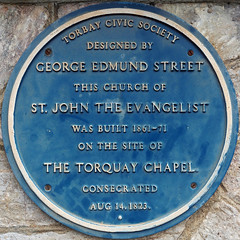 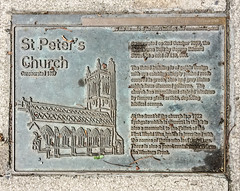 Designed by George Edmund Street this Church of St John the Evangelist was built in 1861-71 on the site of The Torquay Chapel. Consecrated Aug 14. 1823.

The Church of St John the Evangelist, Torquay, United Kingdom where they designed

St Peter's Church Consecrated 1869 Consecrated on 2nd October 1869, the church was built by George Edward Street, at a cost of £18,000. The listed building is of gothic design with eye catching steeply pitched roofs covered in green, blue and grey slates which form diamond patterns. The church has magnificent stained windows by famous glass artists, depicting biblical scenes. At the front of the church is a 1922 Lychgate which is unusual in that it is also a memorial to the Fallen of the First World War. Inside is inscribed with the names of those how lost their lives. There is also a panel containing soil from the Western Front.

Chorley Road, Swinton, United Kingdom where they was