Robert Southey ( or ; 12 August 1774 – 21 March 1843) was an English poet of the Romantic school, and Poet Laureate from 1813 until his death. Like the other Lake Poets, William Wordsworth and Samuel Taylor Coleridge, Southey had begun as a radical, but became steadily more conservative, as he acquired respect for Britain and its institutions. Other romantics, notably Byron, accused him of siding with the establishment for money and status. He is principally remembered as author of the poem After Blenheim and the original version of Goldilocks and the Three Bears. 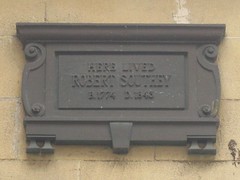 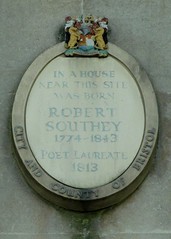 Pridential Buildings, 11-19 Wine Street, Bristol, United Kingdom where they was born near (1774)