Margaret Roper (née More) (1505–1544) was an English writer and translator, and one of the most learned women of sixteenth-century England. She was the daughter of Sir Thomas More and Jane Colt, who probably died in childbirth. Margaret, or "Meg" as her father called her, married William Roper. She was a frequent visitor during More's imprisonment in the Tower of London. Margaret married William Roper in 1521 in Eltham, Kent. They had five children: Elizabeth (1523–60), Margaret (1526–88), Thomas (1533–98), Mary (d. 1572), and Anthony (1544-1597). After Thomas More was beheaded in 1535 for refusing to accept the Act of Supremacy and the Act of Succession (1534) of Henry VIII of England and swear allegiance to Henry as head of the English Church, his head was displayed on a pike at London Bridge for a month. Afterwards, Margaret bribed the man whose business it was to throw the head into the river, to give it to her instead. She preserved it by pickling it in spices until her own death at the age of 39 in 1544. After her death, William Roper took charge of the head, and it is buried with him. William Roper ("son Roper," as he is referred to by Thomas More) produced the first biography of the statesman/martyr, but his homage to his father-in-law is not remembered as well as his wife's efforts. In Alfred, Lord Tennyson's Dream of Fair Women, he invokes Margaret Roper ("who clasped in her last trance/ Her murdered father's head") as a paragon of loyalty and familial love. Roper was the first non-royal woman to publish a book she had translated into English. This was a translation of a Latin work Precatio Dominica by Erasmus, as A Devout Treatise upon the Paternoster. In a letter More mentions her poems, but none are extant. In Robert Bolt's famous play A Man for All Seasons, Margaret and William Roper were major characters. In the 1966 film, she was portrayed by Susannah York. 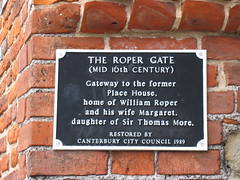