Fellow of the Royal Society, Commander of the Most Excellent Order of the British Empire, biologist, Nobel Physiology or Medicine Laureate (from 1960), Knight Bachelor (from 1965), Companion of Honour (from 1972), and Order of Merit recipient (from 1981)

Sir Peter Brian Medawar OM CH CBE FRS (/ˈmɛdəwər/; 28 February 1915 – 2 October 1987) was a Brazilian-British biologist and writer, whose works on graft rejection and the discovery of acquired immune tolerance were fundamental to the medical practice of tissue and organ transplants. For his scientific works he is regarded as the "father of transplantation". He is remembered for his wit both in person and in popular writings. Famous zoologists such as Richard Dawkins referred to him as "the wittiest of all scientific writers", and Stephen Jay Gould as "the cleverest man I have ever known". Medawar was the youngest child of a Lebanese father and a British mother, and was both a Brazilian and British citizen by birth. He studied at Marlborough College and Magdalen College, Oxford, and was professor of zoology at the University of Birmingham and University College London. Until he was partially disabled by a cerebral infarction, he was Director of the National Institute for Medical Research at Mill Hill. With his doctoral student Leslie Brent and postdoctoral fellow Rupert E. Billingham, he demonstrated the principle of acquired immunological tolerance (the phenomenon of unresponsiveness of the immune system to certain molecules), which was theoretically predicted by Sir Frank Macfarlane Burnet. This became the foundation of tissue and organ transplantation. He and Burnet shared the 1960 Nobel Prize in Physiology or Medicine "for discovery of acquired immunological tolerance". 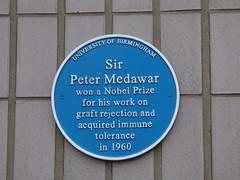