Jane Taylor (23 September 1783 – 13 April 1824) was an English poet and novelist best known for the lyrics of the widely known "Twinkle, Twinkle, Little Star". The sisters Jane and Ann Taylor and their authorship of various works have often been confused, partly because their early ones were published together. Ann Taylor's son, Josiah Gilbert, wrote in her biography, "Two little poems – 'My Mother,' and 'Twinkle, twinkle, little Star' – are perhaps more frequently quoted than any; the first, a lyric of life, was by Ann, the second, of nature, by Jane; and they illustrate this difference between the sisters." 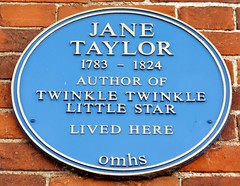