John Cowper Powys (/ˌdʒɒn ˌkuːpər ˈpoʊ.ɪs/; 8 October 1872 – 17 June 1963) was a British novelist, lecturer, philosopher, literary critic, and poet. Although Powys published a collection of poems in 1896 and his first novel in 1915, he did not gain success as a writer until he published the novel Wolf Solent in 1929. He was influenced by many writers, but he has been particularly seen as a successor to Thomas Hardy, and Wolf Solent, A Glastonbury Romance (1932), along with Weymouth Sands (1934) and Maiden Castle (1936), are often referred to as his Wessex novels. As with Hardy's novels, the landscape plays a major role in Powys's works, and an elemental philosophy is important in the lives of his characters. In 1934 he published his important Autobiography. Powys was also a highly successful itinerant lecturer, first in England and then from 1905 until the early 1930s in the USA. Powys moved to Dorset, England, from America, in 1934 with his American partner Phyllis Playter, but in 1935 they moved to Corwen in Merionethshire, Wales. This moved led to the publication of two historical novels set in Wales Owen Glendower (1941) and Porius (1951). Then in 1955 they moved to Blaenau Ffestiniog where Powys died in 1963. 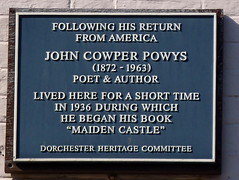 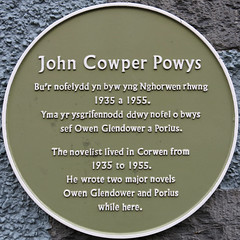 London Road, Corwen, United Kingdom where they was