George Padmore (28 June 1903 – 23 September 1959), born Malcolm Ivan Meredith Nurse in Trinidad, was a leading Pan-Africanist, journalist, and author. He left Trinidad in 1924 to study medicine in the United States, where he also joined the Communist Party. From there he moved to the Soviet Union, where he was active in the party, and working on African independence movements. He also worked for the party in Germany but left after the rise of Nazism in the 1930s. In 1935, the USSR made a decisive shift in foreign policy: Britain and France, colonial powers with active occupations in Africa, were classified as "democratic-imperialisms" — a lower priority than the category of "fascist-imperialist" powers, in which Japan and Germany fell. This shift fell into direct contradiction with Padmore's prioritization of African liberation, as Germany and Japan had no colonies in Africa. Padmore broke instantly with the Kremlin, but continued to support socialism. Padmore lived for a time in France, before settling in London. Toward the end of his life he moved to Accra, Ghana, where he helped shape the politics of Kwame Nkrumah and the Convention People's Party. 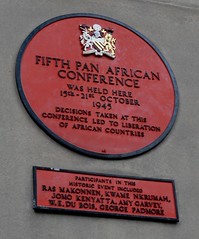