Henry Peter Brougham, 1st Baron Brougham and Vaux, PC, QC, FRS (/ˈbruː(ə)m ... ˈvoʊks/; 19 September 1778 – 7 May 1868) was a British statesman who became Lord High Chancellor and played a prominent role in passing the 1832 Reform Act and 1833 Slavery Abolition Act. Born in Edinburgh, Brougham helped found the Edinburgh Review in 1802 before moving to London, where he qualified as a barrister in 1808. Elected to the House of Commons in 1810 as a Whig, he was Member of Parliament for some constituencies until becoming a peer in 1834. Brougham won popular renown for helping defeat the 1820 Pains and Penalties Bill, an attempt by the widely disliked George IV to annul his marriage to Caroline of Brunswick. He became an advocate of liberal causes including abolition of the slave trade, free trade and parliamentary reform. Appointed Lord Chancellor in 1830, he made a number of reforms intended to speed up legal cases and established the Central Criminal Court. He never regained government office after 1834 and although he played an active role in the House of Lords, he often did so in opposition to his former colleagues. Education was another area of interest. He helped establish the Society for the Diffusion of Useful Knowledge and University College London, as well as holding some academic posts, including Rector, University of Edinburgh. In later years he spent much of his time in the French city of Cannes, making it a popular resort for the British upper-classes; he died there in 1868. 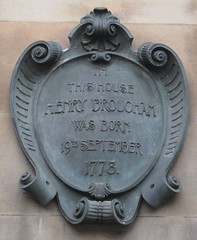 In this house Henry Brougham was born 19th September 1778

21 St Andrew Square, Edinburgh, United Kingdom where they was born (1778)