cardinal, Archbishop of York, and Lord Chancellor of England

Thomas Wolsey (c. March 1473 – 29 November 1530) was an English archbishop, statesman and a cardinal of the Catholic Church. When Henry VIII became King of England in 1509, Wolsey became the King's almoner. Wolsey's affairs prospered, and by 1514 he had become the controlling figure in virtually all matters of state. He also held important ecclesiastical appointments. These included the Archbishopric of York – the second most important role in the English church – and acting as papal legate. His appointment as a cardinal by Pope Leo X in 1515 gave him precedence over all other English clergy. The highest political position Wolsey attained was Lord Chancellor, the King's chief adviser (formally, as his successor and disciple Thomas Cromwell was not). In that position, he enjoyed great freedom and was often depicted as an alter rex (other king). After failing to negotiate an annulment of Henry's marriage to Catherine of Aragon, Wolsey fell out of favour and was stripped of his government titles. He retreated to York to fulfil his ecclesiastical duties as archbishop, a position he nominally held but had neglected during his years in government. He was recalled to London to answer to charges of treason—a common charge used by Henry against ministers who simply fell out of favour and did not necessarily commit actual treason—but died on the way from natural causes. 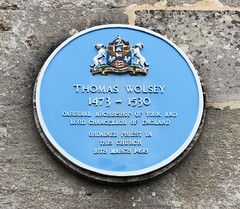 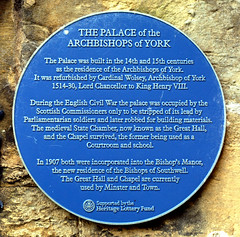 The Palace of the Archbishops of York The Palace was built in the 14th and 15th centuries as the residence of the Archbishops of York. It was refurbished by Cardinal Wolsey, Archbishop of York 1514-30, Lord Chancellor to King Henry VIII. During the English Civil War the palace was occupied by the Scottish Commissioners only to be stripped of its lead by Parliamentarian soldiers and later robbed for building materials. The medieval State Chamber, now known as the Great Hall, and the Chapel survived, the former being used as a Courtroom and school. In 1907 both were incorporated into the Bishop's Manor, the now residence of the Bishops of Southwell. The Great Hall and Chapel are currently used by Minster and Town.