Leonard Jones (17 February 1919–29 November 2004), generally known as Jonah Jones, was born in County Durham, north east England, but known as a Welsh sculptor, writer and artist-craftsman. He worked in many media, but is especially remembered as a sculptor in stone, lettering-artist and calligrapher. He was also Director of the National College of Art and Design in Dublin for four years. Upon leaving school in 1935 at the age of 16, Jones secured a post as assistant at the public library in Felling on Tyneside. The librarian, Mona Lovell, became a close friend and mentor to him, encouraging his cultural interests and introducing him to Quakerism (for a time he attended the Friends’ meeting in Newcastle-upon-Tyne). 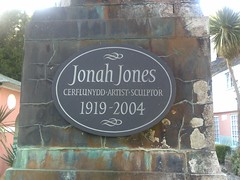 Battery Square, Portmeirion, United Kingdom where they was