Frederick John Perry (18 May 1909 – 2 February 1995) was a British tennis and table tennis player and former World No. 1 from England who won 10 Majors including eight Grand Slam tournaments and two Pro Slams single titles, as well as six Major doubles titles. Perry won three consecutive Wimbledon Championships from 1934 to 1936 and was World Amateur number one tennis player during those three years. Prior to Andy Murray in 2013, Perry was the last British player to win the men's Wimbledon championship, in 1936, and the last British player to win a men's singles Grand Slam title, until Andy Murray won the 2012 US Open. Perry was the first player to win a "Career Grand Slam", winning all four singles titles, which he completed at the age of 26 at the 1935 French Open. He remains the only British player ever to achieve this. Perry's first love was table tennis and he was World Champion in 1929. He began playing tennis aged 14 and his tennis career at 21, when in 1930 an LTA committee chose him to join a four-man team to tour the United States. In 1933, Perry helped lead the Great Britain team to victory over France in the Davis Cup; the team's first success since 1912, followed by wins over the United States in 1934, 1935, and a fourth consecutive title with victory over Australia in 1936. But due to his disillusionment with the class-conscious nature of the Lawn Tennis Club of Great Britain, the working-class Perry turned professional at the end of the 1936 season and moved to the United States where he became a naturalised US citizen in 1939. In 1942, he was drafted into the US Army Air Force during the Second World War. Despite his unprecedented contribution to British tennis, Perry was not accorded full recognition by tennis authorities until later in life because between 1927 and 1967, the International Lawn Tennis Federation, ignored amateur champions who later turned professional. In 1984, a statue of Perry was unveiled at Wimbledon, and in the same year he became the only tennis player listed in a survey of 2,000 Britons to find the "Best of the Best" British sportsmen of the 20th century. 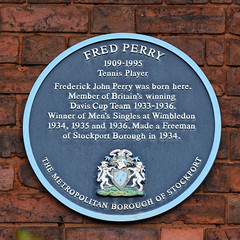 Carrington Road, Stockport, United Kingdom where they was

, Stockport, United Kingdom where they was born near (1909)