John Smith (1781 – 22 July 1852) was a Scottish architect. His career started in 1805 and he was appointed as the official city architect of Aberdeen in 1807, the first person to hold this post. Together with Archibald Simpson, he contributed significantly to the architecture of Aberdeen, and many of the granite buildings that gave the city the nickname 'The Granite City' or also 'The Silver City' are attributed to them. Smith was the son of a successful builder and architect and his own son, William, continued the family tradition by also becoming an architect. After completing his training in London, Smith quickly became established throughout the north-east of Scotland. He secured private commissions to design, renovate or alter numerous country houses, parish churches and castles; his official capacity as City Architect ensured he is also credited with several extensive public works. Towards the middle of his career around the 1830s, as his individuality developed, he gained the nickname of 'Tudor Johnny'; an indication his designs were starting to favour a Tudor Gothic styling. 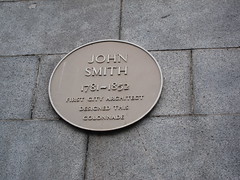