Robert Dudley, 1st Earl of Leicester, KG, PC (24 June 1532 – 4 September 1588), was an English statesman and the favourite of Elizabeth I from her accession until his death. He was a suitor for the Queen's hand for many years. Dudley's youth was overshadowed by the downfall of his family in 1553 after his father, The 1st Duke of Northumberland, had failed to prevent the accession of Mary I. Robert Dudley was condemned to death but was released in 1554 and took part in the Battle of St. Quentin under Mary's husband and co-ruler, Philip, which led to his full rehabilitation. On Elizabeth I's accession in November 1558, Dudley was appointed Master of the Horse. In October 1562, he became a Privy Councillor and, in 1587, was appointed Lord Steward of the Royal Household. In 1564, Dudley became Earl of Leicester and, from 1563, one of the greatest landowners in North Wales and the English West Midlands by royal grants. The Earl of Leicester was one of Elizabeth's leading statesmen, involved in domestic as well as foreign politics alongside William Cecil and Sir Francis Walsingham. Although he refused to be married to Mary, Queen of Scots, Lord Leicester was for a long time relatively sympathetic to her until, from the mid-1580s, he strongly advocated for her execution. As patron of the Puritan movement, he supported non-conforming preachers but tried to mediate between them and the bishops of the Church of England. A champion also of the international Protestant cause, he led the English campaign in support of the Dutch Revolt (1585–87). His acceptance of the post of Governor-General of the United Provinces infuriated Queen Elizabeth. The expedition was a military and political failure, and it ruined the Earl financially. Leicester was engaged in many large-scale business ventures and was one of the main backers of Francis Drake and other explorers and privateers. During the Spanish Armada, the Earl was in overall command of the English land forces. In this function, he invited Queen Elizabeth to visit her troops at Tilbury. This was the last of many events he had organised over the years, the most spectacular being the festival at his seat Kenilworth Castle in 1575 on occasion of a three-week visit by the Queen. Lord Leicester was a principal patron of the arts, literature, and the Elizabethan theatre. Lord Leicester's private life interfered with his court career and vice versa. When his first wife, Amy Robsart, fell down a flight of stairs and died in 1560, he was free to marry the Queen. However, the resulting scandal very much reduced his chances in this respect. Popular rumours that he had arranged for his wife's death continued throughout his life, despite the coroner's jury's verdict of accident. For 18 years he did not remarry for Queen Elizabeth's sake and when he finally did, his new wife, Lettice Knollys, was permanently banished from court. This and the death of his only legitimate son and heir were heavy blows. Shortly after the child's death in 1584, a virulent libel known as Leicester's Commonwealth was circulated in England. It laid the foundation of a literary and historiographical tradition that often depicted the Earl as the Machiavellian "master courtier" and as a deplorable figure around Elizabeth I. More recent research has led to a reassessment of his place in Elizabethan government and society. 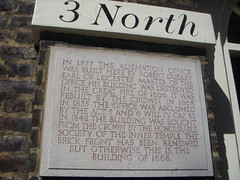 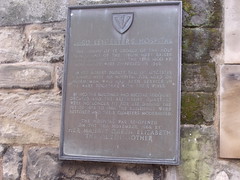 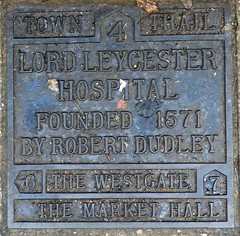 In 1577 The Alienation Office was built here by Robert Dudley Earl of Leicester Master of the Office. His building was destroyed in the Great Fire of 1666. It was rebuilt by the Crown in 1668. In 1835 the Office was abolished by the Act 5 and 6 Will. IV. Cap. 82. In 1842 the building was bought from the Crown by the Honourable Society of the Inner Temple. The brick front as been renewed but otherwise this is the building of 1668.

Lord Leycester's Hospital The Guilds of St George, of the Holy Trinity and of the Virgin Mary raised these buildings about the year 1400 A.D. these guilds were dispersed in 1546. In 1571 Robert Dudley, Earl of Leycester founded here his hospital for aged or infirm men who had seen service in the wars together with their wives. By 1950 the buildings had become seriously decayed and the brethrens' quarters were no longer fit for use. During the period 1958 to 1966 the buildings were restored and their quarters modernised. The hospital was re-opened on the 3rd November 1966 by Her Majesty Queen Elizabeth the Queen Mother