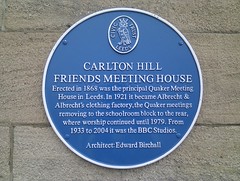 Carlton Hill Friends Meeting House Erected in 1868 was the principal Quaker Meeting House in Leeds. In 1921 it became Albrecht & Albrecht's clothing factory, the Quaker meetings removing to the schoolroom block to the rear, where worship continued until 1979. From 1933 to 2004 it was the BBC Studios. Architect: Edward Birchall