Alā ad-Dīn Kayqubād ibn Kaykhusraw (Persian: علاء الدين كيقباد بن كيخسرو; Turkish: I. Alâeddin Keykûbad, 1190–1237), also known as Kayqubad I, was the Seljuq Sultan of Rûm who reigned from 1220 to 1237. He expanded the borders of the sultanate at the expense of his neighbors, particularly the Mengujek Beylik and the Ayyubids, and established a Seljuq presence on the Mediterranean with his acquisition of the port of Kalon Oros, later renamed Ala'iyya in his honor. The sultan, sometimes styled Kayqubad the Great, is remembered today for his rich architectural legacy and the brilliant court culture that flourished under his reign. Kayqubad's reign represented the apogee of Seljuq power and influence in Anatolia, and Kayqubad himself was considered the most illustrious prince of the dynasty. In the period following the mid-13th century Mongol invasion, inhabitants of Anatolia frequently looked back on his reign as a golden age, while the new rulers of the Anatolian beyliks sought to justify their own authority through pedigrees traced to him. 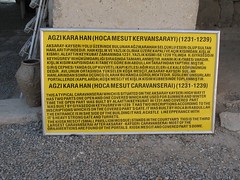 Agzikarahan caravanserai, near Aksaray, Nevsehir, Turkey where they built