Thomas Alva Edison (February 11, 1847 – October 18, 1931) was an American inventor and businessman. He developed many devices that greatly influenced life around the world, including the phonograph, the motion picture camera, and the long-lasting, practical electric light bulb. Dubbed "The Wizard of Menlo Park", he was one of the first inventors to apply the principles of mass production and large-scale teamwork to the process of invention, and because of that, he is often credited with the creation of the first industrial research laboratory. Edison was a prolific inventor, holding 1,093 US patents in his name, as well as many patents in the United Kingdom, France, and Germany. More significant than the number of Edison's patents was the widespread impact of his inventions: electric light and power utilities, sound recording, and motion pictures all established major new industries worldwide. Edison's inventions contributed to mass communication and, in particular, telecommunications. These included a stock ticker, a mechanical vote recorder, a battery for an electric car, electrical power, recorded music and motion pictures. His advanced work in these fields was an outgrowth of his early career as a telegraph operator. Edison developed a system of electric-power generation and distribution to homes, businesses, and factories – a crucial development in the modern industrialized world. His first power station was on Pearl Street in Manhattan, New York. He has been described as America’s greatest inventor. 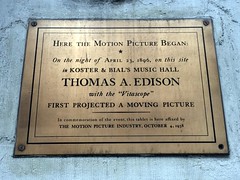 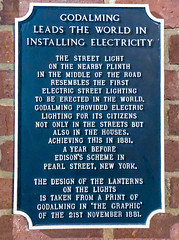 Here the Motion Picture Began: On the night of April 23, 1896, on this site in Koster & Bial's Music Hall Thomas Edison with the "Vitascope" first projected a moving picture. In commemoration of the event, this tablet is here affixed by The Motion Picture Industry, October 4, 1938

Godalming leads the world in installing electricity. The street light on the nearby plinth in the middle of the road resembles the first electric street lighting in the world. Godalming provided electric lighting for its citizens not only in the streets but also in the houses. Achieving this in 1881, a year before Edison's scheme in Pearl Street, New York. The design of the lanterns on the lights is taken from a print of Godalming in "the graphic" of 21st November 1881.

Croft Road, Godalming, United Kingdom where they was

First Electric Light. First successful use of a three-wire electric lighting system was made July 4, 1883, in the City Hotel building in Sunbury. Thomas A. Edison directed the work. The Edison Electric Illuminating Co. plant was at 4th and Vine Streets.

entrance pillar to the Edison and Ford Winter Estates, 2350 McGregor Boulevard, Fort Myers, FL, United States where they was