Air Chief Marshal Hugh Caswall Tremenheere Dowding, 1st Baron Dowding, GCB, GCVO, CMG (24 April 1882 – 15 February 1970) was an officer in the Royal Air Force. He was Air Officer Commanding RAF Fighter Command during the Battle of Britain and is generally credited with playing a crucial role in Britain's defence, and hence, the defeat of Adolf Hitler's plan to invade Britain. Born in Moffat, Scotland, Dowding was an officer in the British Army in the 1900s and early 1910s. He joined the Royal Flying Corps at the start of the First World War and went on to serve as a fighter pilot and then as commanding officer of No. 16 Squadron. During the inter-war years he became Air Officer Commanding Fighting Area, Air Defence of Great Britain and then joined the Air Council as Air Member for Supply and Research. In July 1936, Dowding was appointed chief of the newly created RAF Fighter Command. During the Battle of Britain in the Second World War, Dowding's Fighter Command successfully defended the UK against the attacks of the Luftwaffe, thanks to his prudent management of RAF resources and detailed preparation of Britain's air defences (the Dowding system). He subsequently came into conflict with proponents of the Big Wing tactic, most notably Trafford Leigh-Mallory and Douglas Bader, which along with the inadaquecies of RAF's nighttime defence during the Blitz led to his eventual downfall. In November 1940, Dowding was replaced in command against his wishes by Sholto Douglas, another Big Wing advocate. Dowding retired from the Royal Air Force in July 1942 and was made a peer in June 1943. He died on 15 February 1970, aged 87. 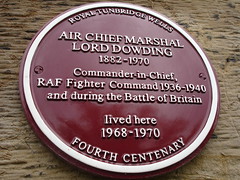 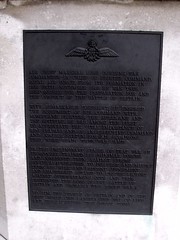 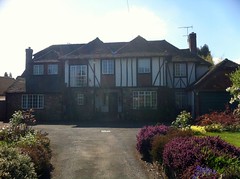 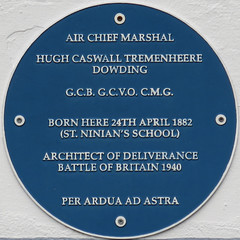 Air Chief Marshall Lord Dowding was Commander-in-Chief of Fighter Command, Royal Air Force from its formation in 1936 until November 1940. He was thus responsible for the preparation for and the conduct of the Battle of Britain. With remarkable foresight he ensured the equipment of his command with monoplane fighters, the Hurricane and the Spitfire. He was among the first to appreciate the vital importance of R.D.F (Radar) and of an effective command and control system for his squadrons. They were ready when war came. In the preliminary stages of that war, he thoroughly trained his minimal forces and conserved them against strong political pressures to disperse an misuse them. His wise and prudent judgement and leadership helped to ensure victory against overwhelming odds and thus prevented the loss of the Battle of Britain and probably the whole war. To him the people of Britain and of the free world owe largely the way of life and liberties they enjoy today.

Old Well Road, Moffat, United Kingdom where they was born (1882)