Jabez Bunting (13 May 1779 – 16 June 1858), English Methodist preacher was born of humble parentage at Manchester. He was the most prominent Methodist after Wesley's death in 1791. He preached successful revivals until 1802, when he saw revivals leading to dissension and division. He then became dedicated to church order and discipline, and vehemently opposed revivalism. He was a popular preacher in numerous cities. He held numerous senior positions as administrator. He watched budgets very closely. He and his allies centralized power by making the conference the final arbiter of Methodism, and giving it the power to reassign preachers and select district supeintendents. He favored the extension of lay power in committees, and was particularly zealous in the cause of foreign missions. Politically, he was conservative, as were most Methodist leaders. 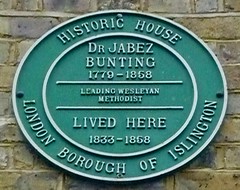 30 Myddelton Square, EC1, London, United Kingdom where they was