The murder of Yvonne Fletcher, a Metropolitan Police officer, occurred on 17 April 1984, when she was fatally wounded by a shot fired from the Libyan embassy on St James's Square, London, by an unknown gunman. Fletcher had been deployed to monitor a demonstration against the Libyan leader Muammar Gaddafi, and died shortly afterwards. Her death resulted in an eleven-day siege of the embassy, at the end of which those inside were expelled from the country and the United Kingdom severed diplomatic relations with Libya. Between 1980 and 1984 Gaddafi had ordered the deaths of several exiled opponents of his regime; bombings and shootings, targeted at Libyan dissidents, occurred in Manchester and London. Five Libyans thought to be behind the attacks were deported from the UK. During the anti-Gaddafi protest on 17 April 1984, two gunmen opened fire from the first floor of the embassy with Sterling submachine guns. In addition to the murder of Fletcher, eleven Libyan demonstrators were wounded. The inquest into Fletcher's death reached a verdict that she was "killed by a bullet coming from one of two windows on the west side of the front on the first floor of the Libyan People's Bureau". Following the breaking of diplomatic relations, Libya arrested six British nationals, the last four of whom were released after nine months in captivity. Two years after Fletcher's murder, the event became a factor in the decision by the British prime minister, Margaret Thatcher, to allow the US bombing of Libya from bases in the UK. In 1999 a warming of diplomatic relations between Britain and Libya led to a statement from the Libyan government admitting culpability in Fletcher's shooting, and the payment of compensation. British police continued their investigation until 2017. Although sufficient evidence existed to prosecute one of the co-conspirators, no charges were brought as some of the evidence could not be raised in court due to national security concerns. As at 2020 no one has been convicted of Fletcher's murder. 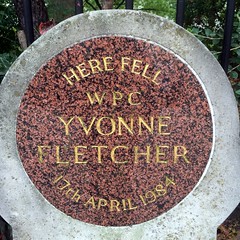