Victoria Mary, Lady Nicolson, CH (née Sackville-West; 9 March 1892 – 2 June 1962), usually known as Vita Sackville-West, was an English author and garden designer. Sackville-West was a successful novelist, poet and journalist, as well as a prolific letter writer and diarist. She published more than a dozen collections of poetry and 13 novels during her lifetime. She was twice awarded the Hawthornden Prize for Imaginative Literature: in 1927 for her pastoral epic, The Land, and in 1933 for her Collected Poems. She was the inspiration for the protagonist of Orlando: A Biography, by her famous friend and lover, Virginia Woolf. She had a longstanding column in The Observer (1946–1961) and is remembered for the celebrated garden at Sissinghurst created with her husband, Sir Harold Nicolson. 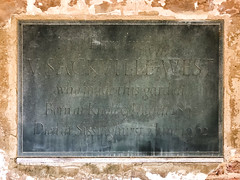 Here lived V. Sackville-West who made this garden Born at Knole 9 March 1892 Died at Sissinghurst 2 June 1962

Sissinghurst, Biddenden Road, Cranbrook, United Kingdom where they was