Thomas Percy, 7th Earl of Northumberland, 1st Baron Percy, KG (1528 – 22 August 1572), led the Rising of the North and was executed for treason. He was later beatified by the Catholic Church. 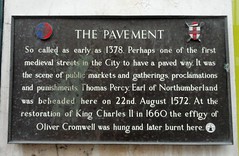 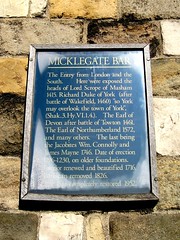 The Pavement So called as early as 1378. Perhaps one of the first medieval streets in the City to have a paved way. It was the scene of public markets and gatherings, proclamations and punishments. Thomas Percy, Earl of Northumberland, was beheaded here on 22nd August 1572. At the restoration of King Charles II in 1660 the effigy of Oliver Cromwell was hung and later burnt here.

Pavement, York, United Kingdom where they was beheaded (1572)

Micklegate Bar. The entrance from London and the South. Here were exposed the heads of Lord Scope of Masham 1415, Richard Duke of York (after Battle of Wakefield, 1460) "so York may overlook the town of York", (Shak.3.Hy.VI.1.4.). The Earl of Devon after battle of Towton 1451. The Earl of Northumberland 1572, and many others. The last being the Jacobites Wm. Connolly and James Mayne 1746. Date of erection 1196-1230, on older foundations. Exterior renewed and beautified 1716. Barbican removed 1826. The Bar was completely restored 1952.

Micklegate Bar, York, United Kingdom where they was