Alfred Milner, 1st Viscount Milner, KG, GCB, GCMG, PC (23 March 1854 – 13 May 1925) was a British statesman and colonial administrator who played an influential leadership role in the formulation of foreign and domestic policy between the mid-1890s and early 1920s. He was also the key British Empire figure in the events leading up to and following the Anglo-Boer War of 1899–1902 and, while serving as High Commissioner, is additionally noted for mentoring a gathering of young members of the South African Civil Service, informally known as Milner's Kindergarten who, in some cases, themselves became important figures in administering the British Empire. In the later part of his life, from December 1916 to November 1918, he was one of the most important members of David Lloyd George's War Cabinet. An influential public servant for three decades, Milner was a visionary exponent of imperial unity at a time when imperialism was beginning to be called into question. His reputation exceeded his achievements: Office and honours were heaped upon him despite his lack of identification with either major political party. — Colin Newbury, 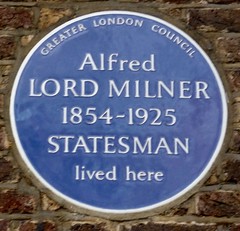