Ferdinand Gregorovius (19 January 1821 Neidenburg, Kingdom of Prussia – 1 May 1891 Munich, Kingdom of Bavaria) was a German historian who specialized in the medieval history of Rome. Gregorovius was the son of Neidenburg district justice council Ferdinand Timotheus Gregorovius and his wife Wilhelmine Charlotte Dorothea Kausch. Gregorovius family members lived for over 300 years in Prussia and had many jurist, preachers and artists. One famous ancestor of Ferdinand's was Johann Adam Gregorovius, born 1681 in Johannisburg, district of Gumbinnen. An earlier ancestor named Grzegorzewski had come to Prussia from Poland. Ferdinand Gregorovius was born at Neidenburg, East Prussia (now Nidzica, Poland), and studied theology and philosophy at the University of Königsberg. In 1838 he joined the Corps Masovia. After teaching for many years, Gregorovius took up residence in Italy in 1852, remaining in that country for over twenty years. In 1876 he was made honorary citizen of Rome, the first German to be awarded this honor. A street and a square are named after him. He eventually returned to Germany, where he died in Munich. He is best known for Wanderjahre in Italien, his account of the travels on foot that he took through Italy in the 1850s, and the monumental Die Geschichte der Stadt Rom im Mittelalter (History of Rome in the Middle Ages), a classic for Medieval and early Renaissance history. He also wrote biographies of Pope Alexander VI and Lucrezia Borgia, as well as works on Byzantine history and medieval Athens, and translated Italian authors into German, among them Giovanni Melis. According to Jesuit Father John Hardon, S.J. Gregorovius was "a bitter enemy of the popes." 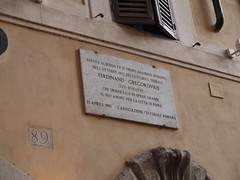 Via Gregoriana 14, Rome, Italy where they was