pugilist and boxing champion of England

Tom Sayers (15 or 25 May 1826 – 8 November 1865) was an English bare-knuckle prize fighter. There were no formal weight divisions at the time, and although Sayers was only five feet eight inches tall and never weighed much more than 150 pounds, he frequently fought much bigger men. In a career which lasted from 1849 until 1860, he lost only one of sixteen bouts. His lasting fame depends exclusively on his final contest, when he faced American champion John Camel Heenan in a battle which was widely considered to be boxing’s first world championship. It ended in chaos when the spectators invaded the ring, and the referee finally declared a draw. Regarded as a national hero, Sayers, for whom the considerable sum of £3,000 was raised by public subscription, then retired from the ring. After his death five years later at the age of 39, a huge crowd watched his cortège on its journey to London’s Highgate Cemetery. 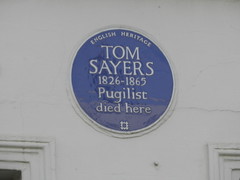 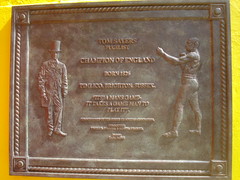 Tom Sayers pugilist, Champion of England born 1826 Pimlico, Brighton, Sussex. "Its' a mans game - it takes a game man to play it".