Iulia Haşdeu (Romanian pronunciation: [ˈjuli.a haʃˈdew]; 14 November 1869 in Bucharest – 29 September 1888 in Bucharest) was a Romanian poet, the daughter of writer and philologist Bogdan Petriceicu Hasdeu. From a very young age, Iulia wrote poems and prose in both Romanian and French, taught herself foreign languages and studied piano and canto. She was the first Romanian woman to study at La Sorbonne University in Paris. At the age of 6 years, she wrote a study about the life and work of Michael the Brave. At the age of 8 she graduated from primary school, and was fluent in French, English and German. At age 11, she graduated from St. Sava Gymnasium and the Conservatory of Music from Bucharest, in the field of piano and canto. In 1881, accompanied by her mother, Iulia went to Paris, where she entered Sévigné College and passed the Baccalaureate exam. In 1886, Iulia enrolled at the Faculty of Letters and Philosophy at Sorbonne University and attended courses at the École des Hautes Études (Schools of Higher Studies) in Paris. Iulia gave two lectures at the university on the logic of hypothesis and on the second book of Herodotus. She started writing a doctoral thesis with the theme centered on Romanian folk philosophy: logic, psychology, metaphysics, ethics and theodicy. While preparing her doctoral thesis, a fragile Iulia contracted tuberculosis in Paris. Despite undergoing treatments in France, Italy and Switzerland, Iulia returned to Bucharest defeated. She died on September 29, 1888 and was buried at Bellu Cemetery, where Bogdan Haşdeu built her a temple in the family vault. Her father dedicated the rest of his life to publishing her works and memories, such as: Bourgeons d’Avril, Fantésies et Rêves, Chevalerie, Confidences en Canevas et Théâtre, Légendes et Contes, works which were published in French and Romanian. In her memory, he also built the Iulia Hasdeu Castle in Câmpina with the “spiritual guidance of his daughter”, with whom he supposedly communicated until the end of his life. 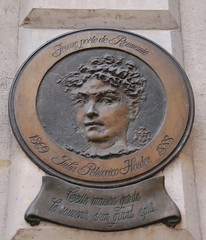