co-founder of the Atlas Works (Birmingham) (from 1885) 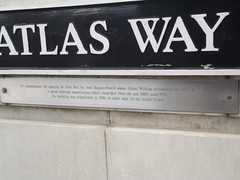 To commemorate the opening of Atlas Way by Jack Daggatt-Powell whose father William co-founded the Atlas Works a metal bedstead manufacturer, which stood here from the mid 1880's until 1958. The building was demolished in 1986 to make way for the Sealife Centre.