William Ford Robinson Stanley (2 February 1829 – 14 August 1909) was a British inventor with 78 patents filed in both the United Kingdom and the United States of America. He was an engineer who designed and made precision drawing and mathematical instruments, as well as surveying instruments and telescopes, manufactured by his company "William Ford Stanley and Co. Ltd." Stanley was a skilled architect who designed and founded the UK's first Trades school, Stanley Technical Trades School (now Harris Academy South Norwood), as well as designing the Stanley Halls in South Norwood. Stanley designed and built his two homes. He was a noted philanthropist, who gave over £80,000 to education projects during the last 15 years of his life. When he died, most of his estate, valued at £59,000, was bequeathed to trade schools and students in south London, and one of his homes was used as a children's home after his death, in accordance with his will. Stanley was a member of several professional bodies and societies (including the Royal Society of Arts, the Royal Meteorological Society, the Royal Astronomical Society and the British Astronomical Association). Besides these activities, he was a painter, musician and photographer, as well as an author of a variety of publications, including plays, books for children, and political treatises. 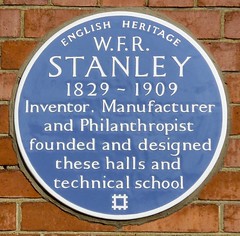 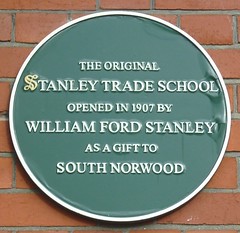 South Norwood Hill, London, United Kingdom where they was