John Ireland (January 1, 1827 – March 15, 1896) was the 18th Governor of Texas from 1883 to 1887. During Ireland's term, the University of Texas was established, and construction on the Texas State Capitol began. Ireland is credited with the selection of local pink granite as the construction material. 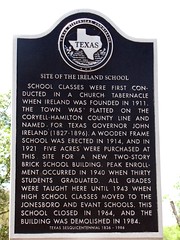 ?, Seguin, TX, United States where they was

Ireland School, Site of the. School classes were first conducted in a church tabernacle when Ireland was founded in 1911. The town was platted on the Coryell-Hamilton County line and named for Texas Governor John Ireland (1827-1896). A wooden frame school was erected in 1914, and in 1921 five acres were purchased at this site for a new two-story brick school building. Peak enrollment occurred in 1940 when thirty students graduated. All grades were taught here until 1943 when high school classes moved to the Jonesboro and Evant Schools. This school closed in 1964, and the building was demolished in 1984. #2651

?, Ireland, TX, United States where they is commemorated

Site of Temporary Texas State Capitol of 1800's. Site of temporary Texas State Capitol of 1880's built, 1882-1883, to replace the previous Capitol, which had burned in 1881. until the building was completed, the orphaned Texas government conducted business in the county courthouse and jail across congress avenue. the three-story brick building-third Texas Capitol in Austin- was used five years. during this time it witnessed the passage of strong legislation to aid education and to halt fence-cutting, which, in 1883, had exploded into a range war. Governors John Ireland (1883-1887) and Sul Ross (1887-1891) both served in this building. in 1883, the university of texas held classes here for its 218 students until campus facilities were complete. on another occasion, cattle baron Charles Goodnight loaded $100,000 in cash in a wheel barrow and had it hauled to the Capitol to force settlement of a land dispute, but officials refused his offer. after the present Capitol was finished, 1888, this structure was used as home of Austin High School, studios for music teachers, and for various offices. when it burned, sept.30, 1899, curious spectators sat on the fence around the new capitol to watch volunteer firemen, hampered by low water pressure, fight the blaze. The old building was razed soon after and the bricks were used in structures throughout Austin.