The Athenaeum or Melbourne Athenaeum is an art and cultural hub in the central business district of Melbourne, Victoria, Australia. Founded in 1839, it is the city's oldest cultural institution. Its building on Collins Street in the East End Theatre District sits opposite the Regent Theatre, and currently consists of a main theatre, a smaller studio theatre, a restaurant and a subscription library. It has also served as a mechanics' institute, an art exhibition space, and a cinema. The building was added to the National Trust's Register of Historic Buildings in 1981 and is listed on the Victorian Heritage Register. 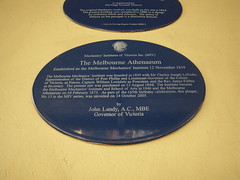 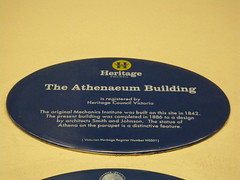 The Athenaeum Building is registered by Heritage Council Victoria. The original Mechanics Institute was built on this site in 1842. The present building was completed in 1886 to a design by architects Smith and Johnson. The statue of Athena on the parapet is a distinctive featured. (Victorian Heritage Register Number H0501)