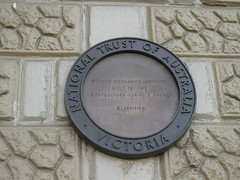 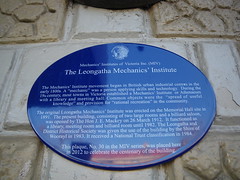 Leongatha Mechanics' Institute. The Mechanics' Institute movement began in British urban industrial centres in the early 1800s. A "mechanic" was a person applying skills and technology. During the 19th century, most towns in Victoria established a Mechanics' Institute or Athenaeum with a library and meeting hall. Common objects were the "spread of useful knowledge" and provision for "rational recreation" in the community. The original Leongatha Mechanics’ Institute was erected on the Memorial Hall site in 1891. The present building, consisting of two large rooms and a billiard saloon, was opened by The Hon. J. E. Mackey on 26 March 1912. It functioned as a library, meeting room and billiard room until 1982. The Leongatha and District Historical Society was given the use fo the building by the Shire of Woorayl in 1983. It received a National Trust classification in 1984. This plaque, No. 30 in the MIV series, was placed here in 2012 to celebrate the centenary of the building.