Confederate States Army Lieutenant Colonel, President of the Board of Directors for A&M College of Texas, prisoner of war (1863), United States Senator (1869-1873), and President Pro Tempore of the Texas State Senate (from 1873) 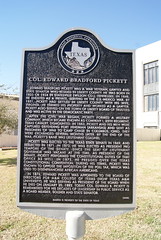 City Cemetery. In 1848, eleven years after Liberty was incorporated, the town's trustees appointed a committee to select a suitable location for a community burial ground. Subsequently, this four-acre tract of land was chosen as the City Cemetery. Local leaders made no provisions for selling burial plots, so families were allowed to select the sites of their choice, often marking them with cypress or iron pickets. Although the graveyard contains numerous unmarked graves, the earliest known burial, that of four-year-old Caroline A. Lund, took place in August 1850. Many pioneer citizens of Liberty are buried here, as are a number of war veterans, including Franklin Hardin (1803-1878) and Cornelius de Vore (1819-1883), who participated in the battle of San Jacinto. Others buried in City Cemetery include E. B. Pickett (1823-1882), an early Texas statesman who served as president of the Texas Constitutional Convention of 1875. By 1946, crowded conditions in this graveyard necessitated the opening of a new cemetery southeast of town. Although still in use, burials at this site now are limited to the families of persons already interred here. The gravesites are maintained by the Liberty Cemetery Association. #9646

Col. Edward Bradford Pickett. Edward Bradford Pickett was a war veteran, lawyer and State Senator who resided in Liberty County. He was born in 1823 or 1824 in Statesville (Wilson Co.), Tennessee. In 1848, he enlisted as a private, serving in the U.S.-Mexico War. BY 1851, Pickett had settled in Liberty County with his wife Virginia. He farmed his property and worked as a lawyer. Pickett also served on the town of Liberty Board of Trustees and was active in the Democratic Party. After the Civil War began, Pickett formed a military company, which became known as Company I, 25th Regiment, Texas-Cavalry, Dismounted. In 1863, Pickett and his men were captured defending Fort Hindman (Arkansas) and sent as prisoners of war to Camp Chase in Columbus, Ohio. They were exchanged several months later. By the end of the war, Pickett’s rank was Lieutenant Colonel. Pickett was elected to the Texas State Senate in 1869, and reelected in 1871. In 1873, he was elected as President Pro Tempore of the Senate. Since the seat of Lieutenant Governor was vacant at the time, as President of the Senate, Pickett performed the constitutional duties of that office as well. In 1875, he presided over the Texas Constitutional Convention. During his terms, Pickett was known to oppose the imposition of the poll tax, which was used to disenfranchise African Americans. In 1876, Edward Pickett was appointed to the Board of Directors for A&M College of Texas (now Texas A&M University). He was serving as President of the Board when he died on January 20, 1882. Today, Col. Edward B. Pickett is remembered for his decades of leadership in public service as a board member, soldier and State Senator. #14366