Frederick, Prince of Wales, KG (Frederick Louis, German: Friedrich Ludwig; 31 January 1707 – 31 March 1751), was heir apparent to the British throne from 1727 until his death from a lung injury at the age of 44. He was the eldest but estranged son of King George II and Caroline of Ansbach, and the father of King George III. Under the Act of Settlement passed by the English Parliament in 1701, Frederick was fourth in the line of succession to the British throne at birth, after his great-grandmother, paternal grandfather and father. He moved to Great Britain following the accession of his father, and was created Prince of Wales. He predeceased his father, however, and upon the latter's death on 25 October 1760, the throne passed to Prince Frederick's eldest son, George III. 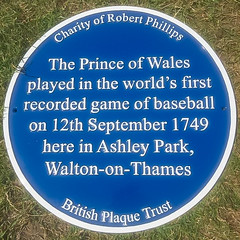 The Prince of Wales played in the world’s first recorded game of baseball on 12th September 1749 here in Ashley Park.

Ashley Park, Walton on Thames, United Kingdom where they played (1749)