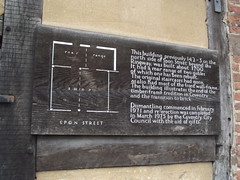 This building previously 142-3 on the north side of Spon Street beyond the Ringway, was built about 1700. It had a rear range of two gables of which one had been rebuilt. The original staircases had gone, as also ahd most of the front wall-frame. The building illustrates the end of the timber-frame tradition in Coventry and the transition to brick. Dismantling commenced in February 1971 and re-erection was completed in March 1975 by the Coventry City Council with the aid of gifts.