Getzendaner Memorial Park Established in 1889, Getzendaner Memorial Park was originally named West End Park as part of Waxahachie’s West End addition. By the early 20th century, it became Chautauqua Park, named for the annual retreat held on its grounds through 1930. Chautauqua assemblies began in western New York in the 19th century as cultural program events, typically held during summer at pastoral settings. From 1900 the Cumberland Presbyterian Church, and later local citizens, held Chautauqua retreats here. For two weeks each year, thousands would gather from throughout Texas and Oklahoma for the program, erecting tents for housing on the park grounds. During the assembly, restaurants, a barbershop, a telephone booth and a post office could all be found in the park. In addition, numerous tents served dining, religious and social needs. An auditorium constructed in 1902 replaced the former assembly hall, which the Chautauqua had outgrown. The new structure became the stage for lectures, concerts and other performances. Later, the building would be used for other occasions, such as high school graduations. The park has hosted other events, including a Confederate soldier reunion, which is noteworthy for the participation of W.H. Getzendaner, for whom the park was renamed in 1914. Born in 1834, Getzendaner moved to Waxahachie in 1858 and later served in the Civil War. Residents held many other events at the park over the years, including speaking engagements for orator and presidential candidate William Jennings Bryan in 1909 and humorist Will Rogers in 1927. With historic ties to the early Chautauqua years, the park remains a gather place for civic and religious events. 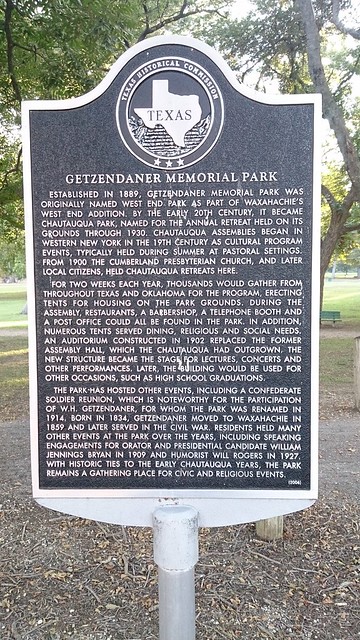 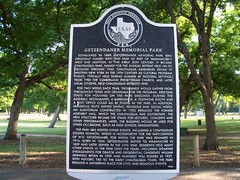