Anne, Princess Royal KG, KT, GCVO, QSO, CD (Anne Elizabeth Alice Louise; born 15 August 1950), is the second child and only daughter of Queen Elizabeth II and Prince Philip, Duke of Edinburgh. She is 17th in the line of succession to the British throne and has been Princess Royal since 1987. Born at Clarence House, Anne was educated at Benenden School and began undertaking royal duties upon adulthood. She became a respected equestrian, winning one gold medal in 1971 and two silver medals in 1975 at the European Eventing Championships. In 1976, she became the first member of the British royal family to have competed in the Olympic Games. The Princess Royal performs official duties and engagements on behalf of her mother. She holds patronage in over 300 organisations, including WISE, Riders for Health, and Carers Trust. Her charity work revolves around sport, sciences, people with disabilities, and health in developing countries. She has been associated with Save the Children for over fifty years and has visited a number of their projects; her work resulted in her nomination for the Nobel Peace Prize in 1990. Anne married Captain Mark Phillips in 1973; they separated in 1989 and divorced in 1992. The couple have two children, Zara and Peter Phillips, and five grandchildren. Within months of her divorce, Anne married Commander (now Vice Admiral) Sir Timothy Laurence, whom she had met while he served as her mother's equerry between 1986 and 1989. In 1988, Princess Anne became a member of the International Olympic Committee (IOC). 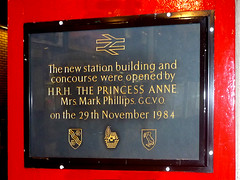 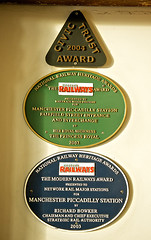 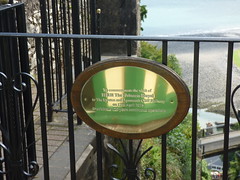 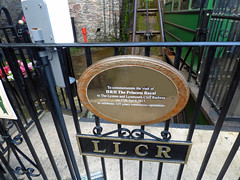 The new station building and concourse were opened by H.R.H. The Princess Anne, Mrs. Mark Philips. G.C.V.O. on the 29th November 1984

London Road, Manchester, United Kingdom where they was