Dame Nellie Melba GBE (born Helen Porter Mitchell; 19 May 1861 – 23 February 1931) was an Australian operatic soprano. She became one of the most famous singers of the late Victorian era and the early 20th century, and was the first Australian to achieve international recognition as a classical musician. She took the pseudonym "Melba" from Melbourne, her home town. Melba studied singing in Melbourne and made a modest success in performances there. After a brief and unsuccessful marriage, she moved to Europe in search of a singing career. Failing to find engagements in London in 1886, she studied in Paris and soon made a great success there and in Brussels. Returning to London she quickly established herself as the leading lyric soprano at Covent Garden from 1888. She soon achieved further success in Paris and elsewhere in Europe, and later at the Metropolitan Opera in New York, debuting there in 1893. Her repertoire was small; in her whole career she sang no more than 25 roles and was closely identified with only ten. She was known for her performances in French and Italian opera, but sang little German opera. During the First World War, Melba raised large sums for war charities. She returned to Australia frequently during the 20th century, singing in opera and concerts, and had a house built for her near Melbourne. She was active in the teaching of singing at the Melbourne Conservatorium. Melba continued to sing until the last months of her life and made a large number of "farewell" appearances. Her death, in Australia, was news across the English-speaking world, and her funeral was a major national event. The Australian $100 note features her image. 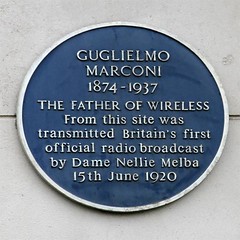 Dame Nellie Melba was born on this site May 19 - 1861
Melbourne, Victoria, Australia 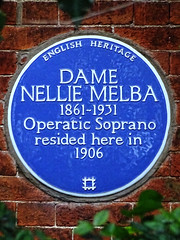 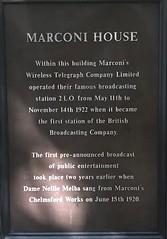 David Street, Richmond, Melbourne, Victoria, Australia where they was born (1861)

Marconi House, The Strand, London, United Kingdom where they was