Companion of Honour, conservationist, Commander of the Most Excellent Order of the British Empire, Fellow of the Royal Society, artist, writer, Fellow of the Zoological Society of London, Distinguished Service Cross recipient, Knight Bachelor, and Olympic sailing medalist (1936)

Sir Peter Markham Scott, CH, CBE, DSC & Bar, FRS, FZS (14 September 1909 – 29 August 1989) was a British ornithologist, conservationist, painter, naval officer, broadcaster and sportsman. The only child of Antarctic explorer Robert Falcon Scott, he took an interest in observing and shooting wildfowl at a young age and later took to their breeding. He established the Wildfowl & Wetlands Trust in Slimbridge in 1946 and helped found the World Wide Fund for Nature, the logo of which he designed. He was a yachting enthusiast from an early age and took up gliding in mid-life. He was part of the UK team for the 1936 Summer Olympics and won a bronze medal in sailing. He was knighted in 1973 for his work in conservation of wild animals and was also a recipient of the WWF Gold Medal and the J. Paul Getty Prize. 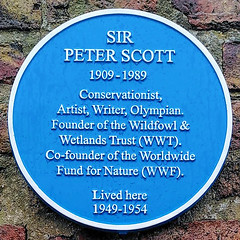 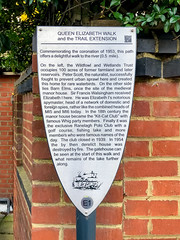 Queen Elizabeth Walk And The Trail Extension Commemorating the coronation of 1953, this path offers a delightful walk to the river (0.5 mile). On the left, the Wildfowl and Wetlands Trust occupies 100 acres of former farmland and later reservoirs. Peter Scott, the naturalist, successfully fought to prevent urban sprawl here and created this home for rare waterbirds. On the other side lies Barn Elms, once the site of the medieval manor house. Sir Francis Walsingham received Elizabeth I here. He was Elizabeth I'd notorious spymaster, head of a network of domestic and foreign spies, rather like the combined heads of Mi5 and Mi6 today. In the 18th century the manor house became the "Kit-Cat Club" with famous Whig party members. Finally it was the exclusive Ranelagh Polo Club with a golf course, fishing lake and more members who were famous names of the day. The club closed in 1939. In 1954 the by then derelict house was destroyed by fire. The gatehouse can be seen at the start of this walk and what remains of the lake further along.

Queen Elizabeth Walk, London, United Kingdom where they was