Captain Robert Falcon Scott, CVO, (6 June 1868 – c. 29 March 1912) was a Royal Navy officer and explorer who led two expeditions to the Antarctic regions: the Discovery expedition of 1901–1904 and the ill-fated Terra Nova expedition of 1910–1913. On the first expedition, he set a new southern record by marching to latitude 82°S and discovered the Antarctic Plateau, on which the South Pole is located. On the second venture, Scott led a party of five which reached the South Pole on 17 January 1912, less than five weeks after Amundsen's South Pole expedition. A planned meeting with supporting dog teams from the base camp failed, despite Scott's written instructions, and at a distance of 162 miles (261 km) from their base camp at Hut Point and approximately 12.5 miles (20 km) from the next depot, Scott and his companions died. When Scott and his party's bodies were discovered, they had in their possession the first Antarctic fossils ever discovered. The fossils were determined to be from the Glossopteris tree and proved that Antarctica was once forested and joined to other continents. Before his appointment to lead the Discovery expedition, Scott had a career as a naval officer in the Royal Navy. In 1899, he had a chance encounter with Sir Clements Markham, the president of the Royal Geographical Society, and thus learned of a planned Antarctic expedition, which he soon volunteered to lead. Having taken this step, his name became inseparably associated with the Antarctic, the field of work to which he remained committed during the final 12 years of his life. Following the news of his death, Scott became a celebrated hero, a status reflected by memorials erected across the UK. However, in the last decades of the 20th century, questions were raised about his competence and character. Commentators in the 21st century have regarded Scott more positively after assessing the temperature drop below −40 °C (−40 °F) in March 1912, and after re-discovering Scott's written orders of October 1911, in which he had instructed the dog teams to meet and assist him on the return trip. 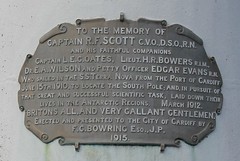 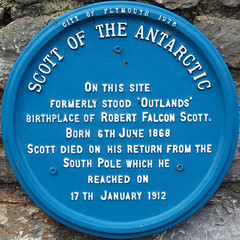 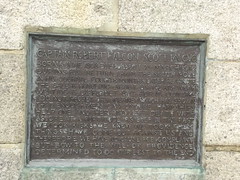 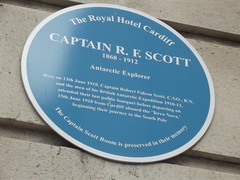 To The Memory of Captain R. F. Scott CVO DSO RN and his faithful companions Captain L. E. G. Oates, Lieut. H. R. Bowers RIM, Dr E. A. Wilson and Petty Officer Edgar Evans RN who sailed in the S. S. Terra Nova from the Port of Cardiff June 15th.1910, to locate the South Pole; and, in pursuit of that great and scientific task, laid down their lives in the Antarctic Regions. March 1912. "Britons All, And Very Gallant Gentlemen"

Roath Park Boating Lake, Cardiff, United Kingdom where they sailed from the port near (1910)

Scott of the Antarctic. On this site formerly stood 'Outlands' birthplace of Robert Falcon Scott. Born 6th June 1868. Scott died on his return from the South Pole which he reached on 17th January 1912

Scott Road, Plymouth, United Kingdom where they was born (1868)

Captain Robert Falcon Scott. RN. CVO. Born 6 June 1868 died about 29 March 1912 During his return from the South Pole in his journal found 8 months later he wrote "The gale is howling about us we are weak writing is difficult but for my own sake. I do not regret this journey which has shown that Englishmen can endure hardships, help one another and meet death with as great a fortitude as ever in the past. We took risks we knew we took them things have come out against us and therefore we have no cause for complaint but bow to the will of providence determined to do our best to the end."

Captain R. F. Scott 1868-1912 Antarctic Explorer. Here on 13th June 1910 Captain Robert Falcon Scott CVO RN and the men of his British Antarctic Exhibition 1910-13 attended their last public banquet before departing on 15th June 1910 from Cardiff aboard the ‘Terra Nova’ beginning their journey to the South Pole. The Captain Scott Room is preserved in their memory.