Vice-Admiral Horatio Nelson, 1st Viscount Nelson, 1st Duke of Bronté, KB (29 September 1758 – 21 October 1805), also known simply as Admiral Nelson, was a British flag officer in the Royal Navy. His inspirational leadership, grasp of strategy, and unconventional tactics brought about a number of decisive British naval victories, particularly during the Napoleonic Wars. He was wounded in combat, losing sight in one eye in Corsica at the age of 35, and most of one arm in the unsuccessful attempt to conquer Santa Cruz de Tenerife when he was 38. He was fatally shot in 1805 shortly before his victory at the Battle of Trafalgar, which is often regarded as Britain's greatest naval victory. Nelson was born into a moderately prosperous Norfolk family and joined the navy through the influence of his uncle, Maurice Suckling, a high-ranking naval officer. Nelson rose rapidly through the ranks and served with leading naval commanders of the period before obtaining his own command at the age of 20 in 1778. He developed a reputation for personal valour and firm grasp of tactics, but suffered periods of illness and unemployment after the end of the American War of Independence. The outbreak of the French Revolutionary Wars allowed Nelson to return to service, where he was particularly active in the Mediterranean. He fought in several minor engagements off Toulon and was important in the capture of Corsica and subsequent diplomatic duties with the Italian states. In 1797, he distinguished himself while in command of HMS Captain at the Battle of Cape St Vincent. Shortly after that battle, Nelson took part in the Battle of Santa Cruz de Tenerife, where the attack failed and he was badly wounded, losing his right arm, and was forced to return to England to recuperate. The following year he won a decisive victory over the French at the Battle of the Nile and remained in the Mediterranean to support the Kingdom of Naples against a French invasion. In 1801 he was dispatched to the Baltic and won another victory, this time over the Danes at the Battle of Copenhagen. He commanded the blockade of the French and Spanish fleets at Toulon and, after their escape, chased them to the West Indies and back but failed to bring them to battle. After a brief return to England he took over the Cádiz blockade in 1805. On 21 October 1805, the Franco-Spanish fleet came out of port, and Nelson's fleet engaged them at the Battle of Trafalgar. The battle became one of Britain's greatest naval victories, but Nelson, aboard HMS Victory, was fatally wounded by a French sharpshooter. His body was brought back to England where he was accorded a state funeral. Nelson's death at Trafalgar secured his position as one of Britain's most heroic figures. His signal just prior to the commencement of the battle, "England expects that every man will do his duty", is regularly quoted, paraphrased and referenced. Numerous monuments, including Nelson's Column in Trafalgar Square, London, and the Nelson Monument in Edinburgh, have been created in his memory, and his legacy remains highly influential. 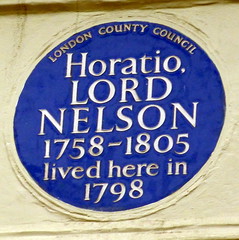 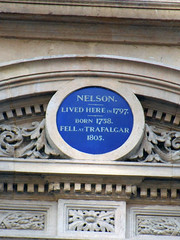 The Cricket Green Opposite this clubhouse is the Cricket or Lower Green, part of the co...
London, United Kingdom 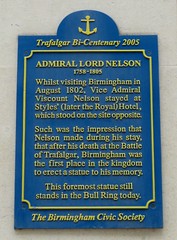 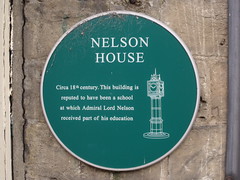 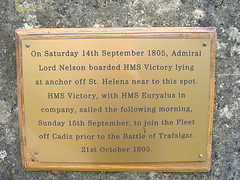 City Arms. Site of North Gate of Saxon Town. Formerly the Town House of the Duke of Nor...
Hereford, United Kingdom 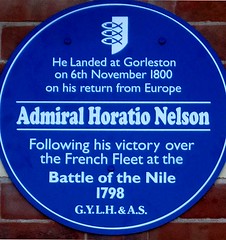 The Cricket Green Opposite this clubhouse is the Cricket or Lower Green, part of the common or grazing land of medieval times which largely escaped enclosure in the 18th and 19th centuries. Cricket has been played there for at least 250 years. Lord Nelson was once a spectator.

Trafalgar Bi-Centenary 2005 Admiral Lord Nelson 1758-1805 Whilst visiting Birmingham in August 1802, Vice Admiral Viscount Nelson stayed at the Styles' (later the Royal) Hotel, which stood on the site opposite. Such was the impression that Nelson made during his stay, that after his death at the Battle of Trafalgar, Birmingham was the first place in the kingdom to erect a statue in his memory. This foremost statue still stands in the Bull Ring today.

Nelson House Circa 18th century. This building is reputed to have been a school at which Admiral Lord Nelson received part of his education

Vice Admiral Lord Horatio Nelson On 21 May 1776 Horatio Nelson, then a midshipman being invalided back to England from the East Indies, arrived in Simon's Bay aboard the H.M.S. Dolphin. The ship remained here for a month and it is probable that Nelson did come ashore during this period.

St George's Street, Simon's Town, South Africa where they was

The Birthplace of Admiral Lord Nelson The Old Rectory in which the Admiral was born stood twenty yards back from this wall. It was pulled down in 1803

?, Burnham Thorpe, United Kingdom where they was born (1758)

Lord Nelson visited Ross in 1802 and walked through these gardens.

On Saturday 14th. September 1805, Admiral Lord Nelson boarded HMS Victory lying anchor off St. Helens near to this spot. HMS Victory with HMS Euryalus in company, sailed the following morning, Sunday 15th. September, to join the Fleet off Cadiz prior to the Battle of Trafalgar. 21st. October 1805.

?, St. Helens, Isle of Wight , United Kingdom where they was near

City Arms. Site of North Gate of Saxon Town. Formerly the Town House of the Duke of Norfolk, this became the City Arms Hotel and Nelson stayed here 23rd August 1802

In this house, then "The Three Cranes" Horatio Nelson and party stayed 17-18th August, 1802

He landed at Gorleston on 6th November 1800 on his return from Europe Admiral Horatio Nelson following his victory over the French Fleet at the Battle of the Nile 1798 G.Y.L.H & A.S.

Harbour's Mouth, Gorleston-on-Sea , Great Yarmouth, United Kingdom where they was