Samuel Langhorne Clemens (November 30, 1835 – April 21, 1910), better known by his pen name Mark Twain, was an American writer, entrepreneur, publisher and lecturer. Among his novels are The Adventures of Tom Sawyer (1876) and its sequel, Adventures of Huckleberry Finn (1885), the latter often called "The Great American Novel". Twain was raised in Hannibal, Missouri, which later provided the setting for Tom Sawyer and Huckleberry Finn. After an apprenticeship with a printer, Twain worked as a typesetter and contributed articles to the newspaper of his older brother, Orion Clemens. He later became a riverboat pilot on the Mississippi River before heading west to join Orion in Nevada. He referred humorously to his lack of success at mining, turning to journalism for the Virginia City Territorial Enterprise. In 1865, his humorous story "The Celebrated Jumping Frog of Calaveras County" was published, based on a story he heard at Angels Hotel in Angels Camp, California, where he had spent some time as a miner. The short story brought international attention, and was even translated into classic Greek. His wit and satire, in prose and in speech, earned praise from critics and peers, and he was a friend to presidents, artists, industrialists, and European royalty. Though Twain earned a great deal of money from his writings and lectures, he invested in ventures that lost a great deal of money, notably the Paige Compositor, a mechanical typesetter, which failed because of its complexity and imprecision. In the wake of these financial setbacks, he filed for protection from his creditors via bankruptcy, and with the help of Henry Huttleston Rogers eventually overcame his financial troubles. Twain chose to pay all his pre-bankruptcy creditors in full, though he had no legal responsibility to do so. Twain was born shortly after a visit by Halley's Comet, and he predicted that he would "go out with it", too. He died the day after the comet returned. He was lauded as the "greatest American humorist of his age", and William Faulkner called Twain "the father of American literature". 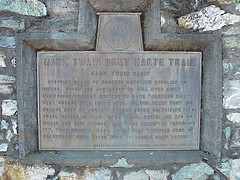 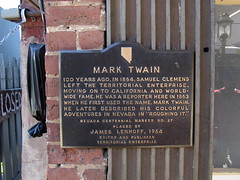 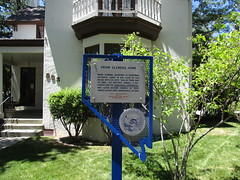 Reunion In Unionville. Across the road and down about 300 feet was the original Unionvi...
Imlay, NV, United States

Fourth Street. During Civil War, "Newspaper Row" stood in this area along Green (Liberty) St. On north side was pro-Union Journal; on south side, pro-southern Courier. Union Army Hq. was on west side of Fourth near Walnut. Macauley Theater opened in 1873 near Fourth and Walnut. It hosted Sarah Bernhardt in 1880. Mark Twain spoke in the area, 1885. Presented by the City of Louisville. (Reverse) A Civil War Compass - From Galleria, all compass points have Civil War personality ties. One block west, Abe Lincoln visited James Speed's law office (1841). One block east is Christ Church, whose rector, Rev. Ashe, married Jeff Davis and Sarah Knox Taylor (1835). One block south, U. S. Grant visited Henry Watterson (1879). One block north, John Wilkes Booth performed on stage (1864). Over.

Near north entry to the Galleria, Louisville, KY, United States where they spoke near

Mark Twain. 100 years ago, in 1864, Samuel Clemens left the territorial enterprise, moving on to California and worldwide fame.  He was a reporter here in 1863 when he first used the name, Mark Twain.  He later described his colorful adventures in Nevada in “Roughing It.”

Orion Clemens Home. Orion Clemens, secretary to territorial Governor James W. Nye, lived in this house with his wife, “Mollie,” from 1864 to 1866.  Samuel, his brother who was a reporter for the Territorial Enterprise, stayed here periodically until leaving the territory in May 1864.  He became famous as “Mark Twain.”

Reunion In Unionville. Across the road and down about 300 feet was the original Unionville School.  Built in 1862, this adobe building was the first public structure in Humboldt County.  Used by such organizations as the Union League, Knights of the Golden Circle, the Free Masons, and the Ancient and Honorable Order of E Clampus Vitus, it served the community until its demolition in 1871.Exactly 109 years later, members of the E.C.V. gathered here to hold a reunion in commemoration of this propitious event.  To the rear of this marker is the site where Samuel Clemens allegedly lived briefly before going to Virginia City in 1862 and taking the name Mark Twain.

Unionville Road, Imlay, NV, United States where they lived near